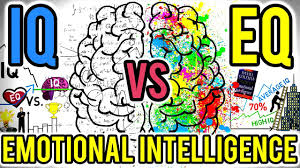 is more important in determining life success, book smarts or street smarts? This is a million-dollar question and is at the heart of an important debate contrasting the relative importance of Intelligence Quotient (IQ) and Emotional Quotient (EQ).

The advocates of the book smarts might suggest that it is their IQ that plays the critical role in determining how well people fair in life. Those who advocate for the importance of what is called street smarts would suggest that EQ is even more important. So, what is your take? before we go forward let’s look at the Definitions, Origin, Abilities, Use in Workplace, Application and Importance.

Emotional Intelligence, or emotional quotient (EQ), is defined as an individual’s ability to identify, evaluate, control, and express emotions. People with high EQ usually make great leaders and team players because of their ability to understand, empathize, and connect with the people around them.

Intelligence quotient or (IQ) is score derived from one of several standardized tests designed to assess an individual’s intelligence. IQ is used to determine academic abilities and identify individuals with off the chart intelligence or mental challenges.

EQ: Teamwork, leadership, successful relations, service orientation, initiative, collaboration. EQ is a better indicator of success in the workplace and is used to identify leaders, good team players, and people who best work by themselves.  IQ: Success with challenging tasks, ability to analyze and connect the dots, research and development.

For a very long time, IQ was believed to be the ultimate measure for success in careers and life in general, studies have shown that there is a direct relation between higher EQ and successful professionals. People with high EQ generally achieve more, excel at teamwork and service and take more initiative. Several corporations and large organizations have mandated EQ tests during the hiring process and have coaching seminars on emotional and social skills.

IQ tests are used most in the field of education and psychology. IQ tests are standardized to recognize highly capable/gifted individuals as well as individuals who need special assistance in the classroom. IQ predicts success with academic achievements and has often been used to determine career options for graduating students.

Having Viewed All This Which Is More Important

IQ is still recognized as an important element of success, particularly when it comes to academic achievement. People with high IQs typically to do well in school, often earn more money, and tend to be healthier in general. ﻿ But today experts recognize it is not the only determinate of life success. Instead, it is part of a complex array of influences that includes emotional intelligence among other things.

A full guide on seeking a Lagos job placement

Fibi is planning to leave Port-Harcourt and her dream place is Lagos. "There are so many opportunities there and for someone who's smart you...
Read more

The most important thing to a small business owner is its employees. If your employees are happy, their productivity will increase, and...
Read more

Skills That Employers Are Looking For In 2020

We all know is not easy keeping up with our ever-changing workplace. Technology is changing the way...
Read more

When it comes to being wealthy, you would not have to rely only on home regularly take...
Read more

How To Maintain A Work-Life Balance While Working From Home

Achieving a good work-life balance while working remotely can be very challenging. It requires critical thinking and...
Read more